This entry shows photos from Angkor Wat which is the largest religious monument in the world.  Although Angkor Wat is the jewel in the Angkor temple crown my heart was stolen by Angkor Thom.


Angkor Wat was constructed during the reign of Suryavaman II who reigned from 1113 AD to around 1150 AD.


Angkor Wat is dedicated to the Hindu god Vishnu.  It was abandoned some years after Suryavarman II’s death, when Jayavarman established a new state capital at Angkor Thom.  However, there has been a small population living within the Angkor Wat area almost up until the present day.  The moat protected it to a certain extent from being totally overtaken by the jungle and there were monks living in and around the temple for many years, as well as the walls providing some shelter for refugees during the civil war. 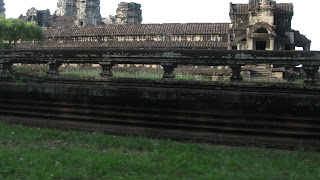 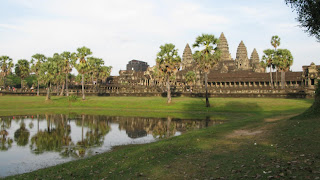 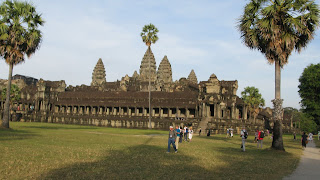 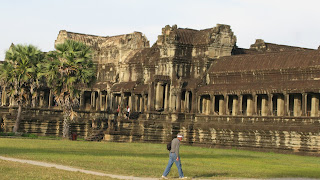 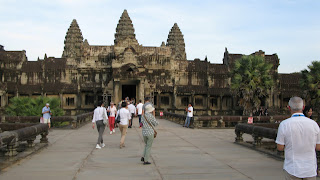 My last picture is one of Ruth and I with Angkor Wat in the background. 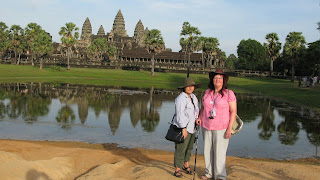 Ruth’s and my trip to Vietnam and Cambodia was incredible in so many ways.  We saw beautiful palaces and temples but also much of man’s inhumanity to man.  Also some of the culture was alien to us however I hope for things to change in the future.
The pace of the trips usually left little time to recover.  I found it hard going though interesting.  The Buddhist temple trip was 4.5 hours most of which was spent walking in the hot sun.  I fell behind on doing the blogs because I was just so tired.  It was not a trip for someone with limited mobility.  Thankfully Thanh Duc, one of the tour directors helped me expand on what I could have seen without assistance.
I am so pleased I had the experience to visit Vietnam and Cambodia.  The trip however was an experience rather than a holiday.