Today was the highlight of our trip when we saw some of the Angkor temple complex near Siam Reap.
Angkor , Khmer for Capital City, was the capital city of the Khmer Empire for approximately the 9th to 15th centuries. Angkor was a megacity supporting at least 0.1% of the global population during 1010–1220.
The word Angkor is derived from the Sanskrit nagara , meaning "city".  The Angkorian period began in AD 802, when the Khmer Hindu monarch Jayavarman II declared himself a "universal monarch" and  “god-king”.  A Khmer rebellion against Siamese authority resulted in the 1431 sacking of Angkor by Ayutthaya, causing its population to migrate south to Longvek.
The ruins of Angkor are located amid forests and farmland near modern-day Siam Reap city.  The temples of the Angkor area number over one thousand, ranging in scale from nondescript piles of brick rubble scattered through rice fields to the Angkor Wat, said to be the world's largest single religious monument.  Visitors approach two million annually, and the entire temple complex, including Angkor Wat and Angkor Thom, is collectively protected as a UNESCO World Heritage Site.
This blog entry shows photos from the Bayon Temple which was the state temple of Jayavarman VII.  It epitomises the creative genius and inflated ego of Cambodia’s most celebrated king.  Its 54 Gothic towers are decorated with 216 gargantuan smiling faces of Avalokiteshvara, and it is adorned with 1.2km of extraordinary bas-reliefs incorporating more than 11,000 figures. 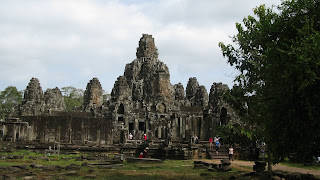 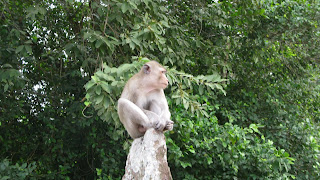 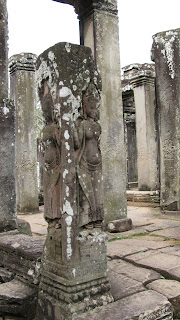 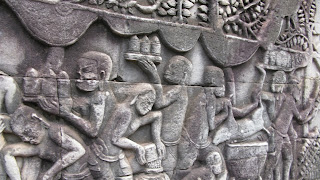 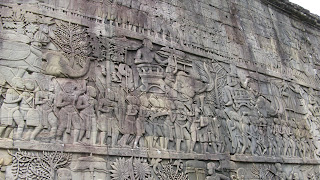 This last picture shows collapsed masonry that has been catalogued in the hope of rebuilding a particular temple structure. 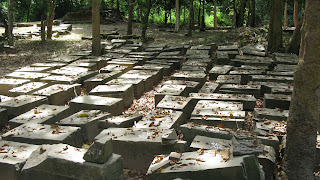