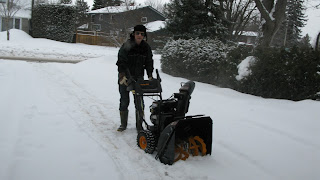 Snow had fallen overnight so Andy had to start the day by snowploughing the drive.

This afternoon Andy took me to the Winterlude Snow Kingdom event at Jacques-Cartier Park in Gatineau across in Quebec province.  There were some splendid snow sculptures, see below.  The snow sculptures were much bigger than I had imagined them to be. 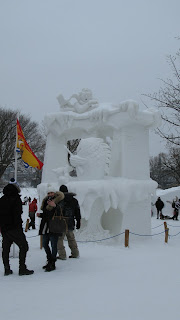 The children were having great fun on snow slides which made me wish I was a little fitter so that I could take part. There was also a zip line which was tempting however the queue was 90 minutes long and it was too cold to stand still in that temperature.  In fact it was so cold my glasses kept steaming up. 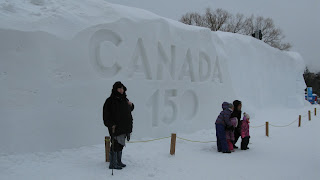 This year is the 150th anniversary of Canada.  Andy took this photo of me standing in front of a snow sculpture celebrating the anniversary.