At our morning briefing we were told that we have entered Antarctica waters.  This briefing was to tell us the rules about landing on Antarctica.  We also had instructions on how to use the Zodiac dinghies which will be taking us to shore.

Afterwards Ruth and I went up on deck to see if there were any birds about.  Birds often follow the ship because this way they get an easier life by being able to glide in the air currents created by the ship.  Another benefit for the birds is the amount of fish the ship's passage brings to the surface.

Now you have a chance to play 'spot the birds' in the following picture. 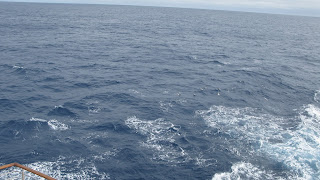 The next wildlife we encountered were much easier to spot.  They were using one of the two hot tubs at the stern of the ship. 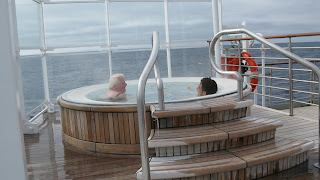 Late this afternoon we saw some humpback whales following the ship.  They even stayed around until we were having pre-dinner drinks in one of the lounges. 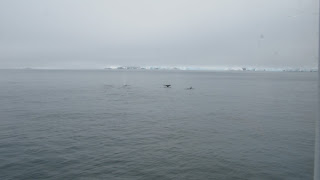 Ruth has far more spectacular pictures of the whales but I do not have the knack of catching the whales at their photogenic best.

Finally we had our first view of the Antarctic mainland.  It is unbelievable that at some point tomorrow we will be setting our feet on the Antarctic continent. 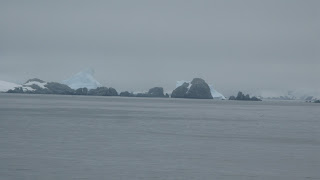 When I was a child I had a goal of visiting every country in the world.  I soon realised this was impossible for a number of reasons and modified my goal to visiting every continent.  Tomorrow I shall set foot on my final continent.
Posted by D.C.J.F.R. at 6:02 PM