Lovran is a village and a municipality in Primorje-Gorski Kotar County, Croatia.  As I said in a previous entry Lovran is where our hotel is located.  It is situated in eastern Istria, on the western coast of the Kvarner Bay with a population of 4,101 in the municipality and 3,336 in the village itself.  Its name derives from Laurel, as shown in the coat of arms.  Lovran is not far from Opatija which we visited earlier in our stay.

Today I took a stroll into the town and took the following pictures. 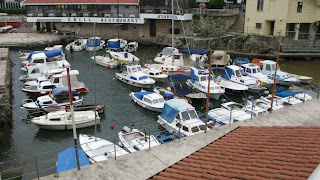 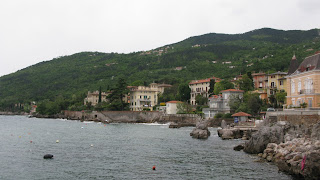 There is a local coastal promenade that stretches from Volosko to Lovran.  Officially named the Franz Joseph I Promenade, it is still best known as the Lungomare.  Dating back to the heyday of Opatija as a health and tourist resort at the turn of the 19th and 20th centuries, the Lungomare was built in parts. The northern part, from Volosko to Opatija, was completed in 1889, the same year that Opatija was officially declared a climatic health resort. The southern part, connecting Opatija to Lovran, was finished in 1911.

I returned to the hotel along the Lungomare which was a very enjoyable walk.  The waves were lashing against the rocks and I wished I could add sound to this blog.  At least I could take photos. 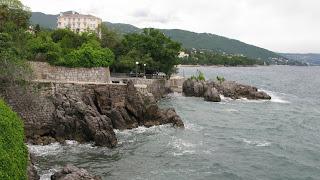 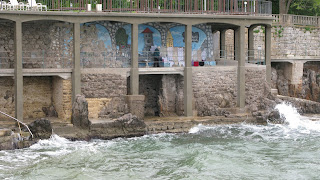