I did not undertake the morning's expedition to Petermann Island as I felt unable to cope with the rigours of the rocky landing.  This was disappointing but sensible as there were many other expeditions to come.

Instead I watched the Zodiacs coming to and from the ship. 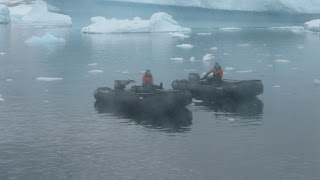 Thankfully I was able to take part in the afternoon's Zodiac cruise of Pleneau. Pleneau is sometimes known as an iceberg graveyard. Icebergs from many areas are trapped in the shallow waters of Pleneau having been brought in by wind and currents. 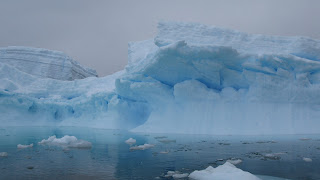 Our temporary home of the Silver Explorer was rather dwarfed by the surrounding icebergs and mountains. 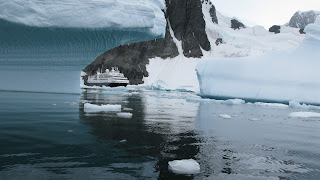 Ruth and I are pictured here together on the Pleneau Zodiac cruise with a typically droopy seal for a backdrop, again no camera tricks. 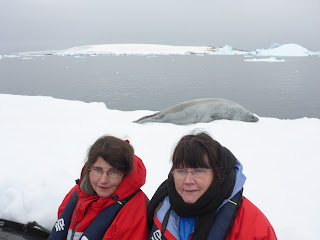 This trip was the one time I felt bitterly cold while in Antarctica.  It had been snowing during our Zodiac cruise.

Once all the Zodiacs had returned the ship began making its way down the Lemaire Channel.  There was much ice in the channel and it wasn't a given that we would make it through to our next destination.  Most people went up on deck to watch the Silver Explorer captain find a route through the ice in the channel. 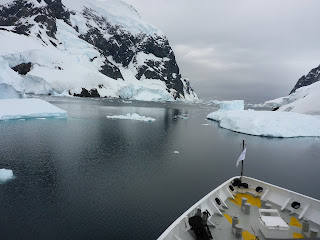